I want to make sure there is no doubt in anyone's mind that I not only like to read but I love books. Growing up my mother and I were members of the Doubleday Bookclub,the Literary Guild and the Book of the Month Club. My summers were rated by how many books I read and sometimes how many times I reread a book. I admit to reading Gone With The Wind at least three times during 8th grade and high school.

During my high school years I discovered Richard Brautigan's classics which included "Trout Fishing in American" and  "A Confederate General At Big Sur". I  wrote a paper on James Baldwin's "The Fire Next Time"  and "Giovanni's Room" followed by  Lawrence Ferlinghetti's "A Coney Island of the Mind". My best friend chose Edward Albee so I was emerced in "Tiny Alice" and the "American Dream".

Read farther and you will see what brought on this trip down memory lane!

During the last year I have been debating the advent of eReaders.The number of bookcases and boxes of books in my house has pushed Chuck to the edge and he strongly suggested I find an eReader. So on this blog and EverydayGenealogy.com I have documented how I chose the Kindle over the Pandigital and Nook eReaders.

While I have learned to embrace the Kindle there was still the issue of all the books lining bookcases and filling boxes in the house. Over the years I heard fellow genealogists talk about LibraryThing.com and casually thought about entering my genealogy books 'in the cloud'. The thought of putting ALL my books up there was a bit daunting.

As Tori is fond of telling me and all my friends and family know - Tori Rules.  Since she was a small child she has had a fascination with cash registers and scanners. Not the scanners we use to scan pictures or documents. Tori's love is barcode scanners like those used in libraries, warehouses, Home Depot and virtually every department store in the world. She will find the self checkout in any store and make me go through it whether I have one item or twenty.

After another shopping trip and Tori going on and on about how much she wanted a scanner I told her to see if LibraryThing supported scanners and if they did I would buy one.  About 10 minutes later she had all the information and was THRILLED that they did.

Her next assignment was to go online and do some price comparisons. The girl was MOTIVATED! She was a bit sad to find out the the local electronics stores were considerably higher than Amazon so she would have to wait a few days for her scanner.

ISBN Numbers, Bar Codes and All The Others

As promised LibraryThing works great scanning books that have barcoded ISBN Numbers. The scanner as advertised has a handy stand or can be held for quicker scanning. Below is a video of Tori explaining to me how it worked after she had scanned two or three books.

Later she took her laptop and started some serious scanning on my two of my bookcases.  Here is where we come into 'All The Others'. The books my friends and I were reading in high school do not have 'standard' ISBN numbers that we are used to seeing in the the 21st century, let alone barcodes. They have a Library of Congress Category Card Number buried in the copyright information.

Some quick research explained that the ISBN number started between 1967 and 1970 and was enhanced in 1974. My books from the 1980's and 1990's have an ISBN number on the back or as part of the copyright, but certainly not a barcode. 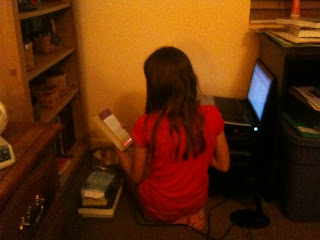 One thing I have learned during this scanning adventure is how much I LOVE books: holding them, leafing through them and the memories they hold.  An eBook would not have brought back the same high school memories like seeing my best friends name in the Edward Albee book in her handwriting. I have not seen her in decades, but I felt just as close to her in that moment as I did in 1970.

Tori tells me that in her 6th grade class the students are allowed to bring eReaders to class. She is deciding if she will use her iPad or buy a Kindle Fire with her Christmas money.  It will be interesting to see her grow up in the 'eBook' world.

Stories About You and Me